What is in the box?

The Swan we received for reviewing came in a rather poor packaging (Fenda confirmed that the next shipment of the Swan will include the improved packaging). However, the box contained the swan protected inside a nice plastic case, but there was no protection for the case itself inside the box. Inside the case, there was the W18BT Bluetooth speaker, and the USB charging cable. The box also contained a user manual and warranty document. 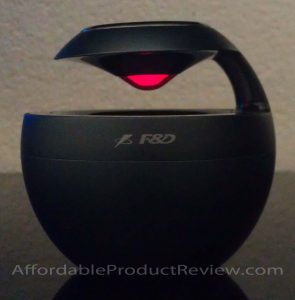 F&D Bluetooth speaker W18BT is the most beautiful and most artistic portable Bluetooth speaker that we ever reviewed. Neo-alloy built and exceptionally smooth finish gives it a very attractive look and feel. It seemed very carefully crafted and had a flawless finish. It felt very nice and durable. But you would not want to drop it, because the Swan is indeed too flawless to put a scratch on. It is available in two different colors: White and Black. We had the Black one for reviewing.

Swan’s touch panel is located on the top. It has five buttons: Volume up and down, forward and reward, and in the middle the button with the Bluetooth icon. This button serves multiple purposes: pairing with devices, receiving or rejecting calls, and Pause and Resume. The tiny microphone hole is located between forward and volume down button. The mini USB port for charging is located on the bottom left side of the speaker. The Power on/off switch is located on its bottom surface. On its right side is the F&D logo in gray. Just below the touch panel is the Breathing light. The heart of the Swan, the 2-inch full range Neodymium speaker driver, is located beneath the light. On the front edge is the slogan that says, ‘Wireless freedom with moving clarity for your senses’. Let us see if the Swan lives up to its slogan.

You may want to check our video review of the Swan below. 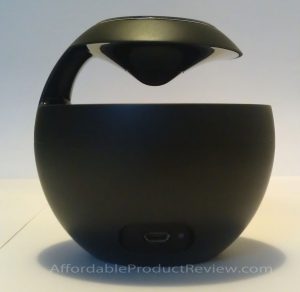 We powered on the Swan. The touch buttons lit up in Blue and red colors. The breathing light also lit up. The lights were very soothing and mild to your eyes. Immediately as the buttons lit up, we heard a sexy female voice saying, ‘Power On’. The voice was so amazingly clear that it felt as if a woman was there in our lab. Our phone’s Bluetooth was already activated, and within a couple of seconds, we saw FENDA SWAN in the list of Bluetooth devices on our phone. We clicked on FENDA SWAN, and it was connected immediately. We heard the same voice saying, ‘Connected’. Again, the voice was so lively, that it almost startled us. We selected a song from our phone and the Swan started playing it instantly.

The music output amazed us. The sound was remarkably clear, full, and rich. The bass was very deep. The clarity of its music output did move us. Swan’s volume controls are independent of your phone’s volume, which means, you get to pump up the volume even higher than your phone’s maximum volume. The sound output did not distort as long as we kept the volume level up to 95% (Phone’s volume 95%, and Swan’s volume 95%). But turning the volume higher than 95% (on the phone or on the Swan) resulted in a slight distortion of base and voice. But you would hardly ever need such high volume settings, because, the Swan is loud enough even the volume is set at about 60%. We can even hear it from three rooms apart.

Using W18BT as a Hands-free speaker 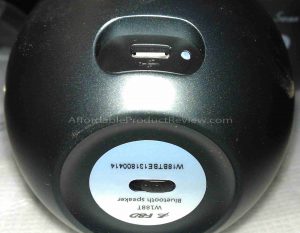 We received several phone calls using the Swan. The voice quality we received from the Swan was as lively as the built-in female voice we heard earlier. There was no echo or noise. The other end also admired the quality of voice they heard, thanks to the powerful microphone of the Swan.

However, the Bluetooth range of F&D Bluetooth speaker W18BT was not as great as we expected. The Bluetooth connection dropped every time we took our phone more than 20 feet away from the Swan. It even dropped at 12 feet distance once as we tried to take it to the next room. However, for testing, we took it into a long empty hallway (about 35 feet long), thankfully the connection did not suffer any interruption even when we placed the Swan and our phone at the opposite ends.

On the negative side, we found the buttons on the touch panel unresponsive on several occasions. We faced this problem with volume controls. It took several presses on the volume down button before it could actually turn the volume down.

Fenda W18BT takes about 1.5 hours to fully charge itself. Its battery lasts for about 4.5 hours of continuous use (playing music, receiving several phone calls).

F&D Bluetooth speaker W18BT is a high-end portable Bluetooth speaker that features an ingenious design and flawless look. Voice quality and sound output of the device are remarkably rich and full. Hands-free phone call answering works exceptionally well. It can be a great choice as a car’s Bluetooth Handsfree kit. The Swan might even turn into your most favorite speaker when you are not in the mood to power on your 5.1 or 7.1 speakers. We would have given the Swan a perfect rating if it had a better Bluetooth range and if the touch buttons were more responsive. Still, we highly recommend the Swan from Fenda.

How to buy a laptop perfect for your needs